Top-Notch British Thriller from L V Hay, THE OTHER TWIN 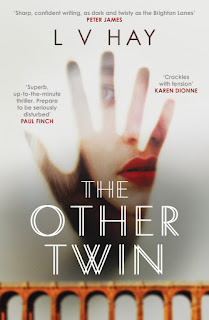 THE OTHER TWIN is a true breakthrough book: a thriller so intricate and compelling that it leaps away from previous books by the same author, into new and dangerous terrain. Presented as a "debut thriller" by Orenda Books, it hit the shelves a week ago. The author was previously known as Lucy V Hay -- but it makes good sense to see her writing drastically shifted in this new book. And the androgynous "L V" name also fits, in an entirely different way.

The book opens with an ominous scene of emotional abuse, quickly flashing instead to Poppy, a young woman way over her head in drinking and casual sex, trying to pull herself together after an all-night binge and the "mother of all hangovers," so to speak. Hers in the voice that gives us most of the story in THE OTHER TWIN. She has a past crammed with love and loss at the seacoast city of Brighton that she walked away from a year earlier, and her party life (not really balanced by her other-city job) is this cover for confused regrets and pain. Chapter by chapter, she faces the complicated mess of her past, propelled by what takes her "home again" at the start of the action: the supposed suicide-by-jumping of her younger sister India.

But there's a second voice that whispers to us periodically -- perhaps a killer's words and contorted emotions, as he enacts the twisted reality of "She Who Must Be Obeyed." Hay's mastery of suspense is echoed in the eerie sense of evil and manipulation that oozes from these scenes. Can Poppy, searching for the truths behind her sister's death, escape the seeping and vicious mind that's calling the plays around her?

The book walks an interesting knife edge of noir and violence: Much of the cruelty exerted by the shadowy perpetrators is so indirect, so disguised, that it never quite crosses into being graphic -- but the horror is even more haunting in this form.

Expect twists all the way through, and a final one that's as painful as being knocked over on a cement surface -- everybody bleeds from the heart, and as the powerful resolution arrives, it's clear there will be no escape from hurt. But maybe, maybe, there can be some escape from being hopelessly lost in a net of deceit.

Well worth reading. Yes, the title points to some meaning in the story -- but not what you might expect. And it's a stand-alone, at least so far, so there's no need to dig into Hay's earlier work -- which you can scan if you like at her (somewhat difficult to navigate) website. This title comes via Orenda Books, where the list of really fine mysteries is becoming impressive.