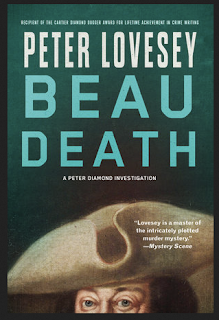 American Thanksgiving is becoming a very long sort of holiday -- schools close early in the week or don't open at all, and turkey consumption only occupies one day of the break. On the other days, a good mystery is a worthwhile diversion. In the case of BEAU DEATH, now is the time to order for the December 5 release via Soho Crime; local stores and online ones can handle your order and make sure you get a first-day-of-release copy of this charming British mystery.

Fans of Peter Lovesey's "Peter Diamond Investigations" know they'll get more than plot, and more than the performance of Diamond and his police team in Bath -- they find a rich and satisfying feast of eccentric and sometimes sweet, sometimes dangerous, quintessential British figures. In BEAU DEATH, the discovery of a skeleton in a building being demolished leads Diamond into the small city's elegant past, when the flashy Beau Nash ruled the stylish crowd.

In fact, if Diamond's difficult supervisor Georgina Dallymore gets her highly political way, Diamond may need to don the traditional garb that members of the Beau Nash Society wear, in order to investigate possible victims as well as murderers. (And he won't exactly be armed.) As in so many others in this series, Diamond also faces all-in-the-arts pressure from his lover Paloma, and urgency from his rising investigator Ingeborg, each pushing him in another direction.

The first 75 pages is admittedly a bit slow and tame, as Diamond is "schooled" by the three women. But when Ingeborg lands the best blow, it brings both Diamond and the book back to traditional fast-paced and risky crimesolving. Diamond tunes in as Ingeborg points him back toward the scene of the murder they've uncovered:


"Under the rubble. Who knows what may be buried there? Is is still cordoned off?"

A chill of guilt went through him. He couldn't answer. He hadn't been back. He stood still, lost for words.

Ingeborg wasn't sparing him. "We don't have any idea who the killer of the man in the loft was except he used the place to hide the body. Chances are he lived there as a tenant. You can't live in a place without leaving traces of yourself. Who knows what might turn up if we do a dig? ... Aren't you listening, guv? I'm talking about the stuff he might have discarded. An empty cigarette packet, a lottery ticket, a teaspoon, a glove, a hairclip, a foreign coin. It helps build a picture of who was living there. I don't need to tell you this."

She was right. His mindset was all wrong. He'd given so much mental energy to learning about Beau bloody Nash that basic procedures had been neglected.

Murders multiply, but for potent reasons of his own, Diamond doesn't dare allow his boss to call in other officers. He'll have to push his team to new roles and new results.

Once the crimesolving got active, I had lots of fun with BEAU DEATH, chuckling at Peter Lovesey's dry humor and guessing ahead on what might be revealed in the next few pages. No nightmares from this one, no gruesome scenes, just a cheerful level of suspense and discovery. Some of it. of course, about Diamond himself.

Insulate your holiday season with books like this one, and things can stay in proportion. Some joy, some humor, and some long evenings visiting a classic British location in the hands of a master storyteller with more than 30 mysteries under his belt. Too many awards to Lovesey to even list them, but one of the more recent was a Lifetime Achievement award at Malice Domestic. BEAU DEATH arrives across the Atlantic thanks to Soho Crime, the international and exhilarating imprint of Soho Press.