The ninth "Billy Boyle World War II Mystery" from James R. Benn came out last fall -- and, knowing it would be an exceptional read, I tucked away a copy of THE REST IS SILENCE for later enjoyment. The reviews that came out at publication were terrific, and I now can add my "yes!" to the others.

Benn's series began with Billy Boyle in 2006, as Soho Press brought the first book out within its Soho Crime label. On his author website, Benn describes the books as a historical mystery series set within the Allied High Command during World War II. That means the first book opens in 1942, as Billy Boyle, a young police detective in a Boston Irish family, discovers that his parents' attempt to keep him home for the war has failed -- "Uncle Ike," General Eisenhower, is headed out to the battlefields, and Boyle, an investigator for the general's most private quandaries, is also on his way to war. 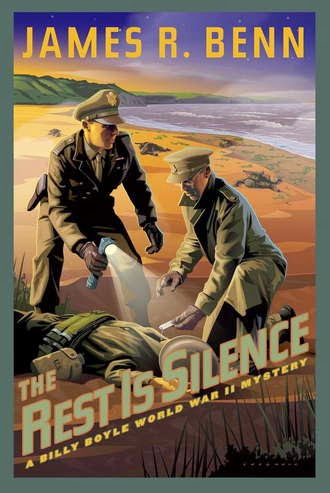 Each volume has moved the war along to another locale, another crisis point, and at the start of THE REST IS SILENCE, it's April 1944 and Billy's assignment takes him to the southwest coast of England, where Allied Forces are preparing to invade Europe -- preparing, that is, for D-Day. The discovery of a murdered man in a very sensitive location means Boyle and his investigating partner Kaz (Lieutenant and Baron Piotr Kazimierz) need to nail the crime and criminal swiftly, to make sure nothing in the D-Day plans has been compromised.

But the family in the gracious home they visit nearby, where a wounded colleague who's been Kaz's friend is recovering, turns out to be much stranger than the first assignment, and soon Billy and Kaz are probing cautiously in an explosive mix of British antagonisms that range from class prejudice to sibling rivalry. When another death takes place, among a much larger disaster nearby, the Allied High Command detective unit expands in number, focus -- and risk.

In spite of its setting and timing, THE REST IS SILENCE is a classic police procedural, in which Billy Boyle's well-nurtured habits of appraisal and inquiry are explored deftly in Benn's polished and often evocative storytelling. I'm sure I should have put the book down more often, to tackle other tasks ... but I didn't want to, and eventually I fixed a final massive mug of tea (in sympathy with the Brits on scene) and charged through the final and engrossing chapters. I found just the right number of plot twists, and the hardest part about finishing the book was keeping them quiet -- because my husband (and partner in crime fiction) is reading this next.

No pressing need to read the earlier books in the series before this one, but if you do, some small comments  that Billy makes, as well as the book's final scene, will have extra resonance. And besides, why would you want to miss out on such good (and historically well-tuned) entertainment?

(PS: The next Billy Boyle mystery comes out in Sept 2015; start now and you have time to read, or re-read, the entire series before then.)
Beth Kanell at 9:29 PM
Share