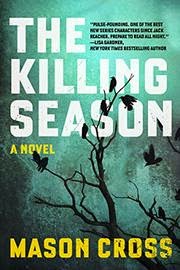 I'm a devoted fan of Lee Child's Jack Reacher series -- there's something about the honor code that Reacher carries into his work that gives these fast-paced thrillers an odd satisfaction, despite their high body counts and strongly gendered character roles.

So it's interesting to see how Mason Cross changes the pattern. Born in Glasgow, Scotland, and living and writing in England, Cross's debut, THE KILLING SEASON, is set squarely in the American heartland. The premise is all too believable: A mentally very nasty sniper, sentenced to die and being transported toward his final cell, somehow ends up released as a side effect of a mob move. Or at least, that's what it first looks like to specialist Carter Blake, hired by the FBI for quick action, and the single-mom FBI special agent working with him, Elaine Banner.

Carter Blake is good -- everyone on the short list of people who know him and his work agree. But it's quickly clear that he and Banner are being used, not just by the agency but also by the Chicago sniper, as they race across the country, trying to prevent more spree killings.

Banner's colleague Steve Castle running the operation doesn't think much of her, or of the specialist tagging along. That's a problem that Carter Blake needs to manage, too, as well as chasing the killer:


"This is a warm-up," I said. "He'll move on to specific hits soon. His enemies. People who he thinks have wronged him."

Banner was still crouched next to the body. Her eyes flicked up to me, and for the first time I heard irritation in her voice. "Were you paying attention to the file? That's completely inconsistent with the established MO."

"It's not inconsistent at all," I said. "And the conditions on the ground have changed. He's a soldier. Soldiers adapt."

"Wardell's an indiscriminate killer," Castle said. ... "Maybe you need a little more time to catch up, Blake. I'm sure we can find you someplace quiet to study."

I glanced at the body again. "The last thing Wardell is," I said, "is indiscriminate. You believe that, you're making a big mistake."

See? Jack Reacher probably wouldn't have explained that much. Carter Blake has reasons to do so, including keeping his reputation and trying to get the agency to work with him, not against him. But the escaped sniper Wardell has a plan that even Carter Blake can't see for quite a while, and the clock is ticking toward the next killing spree, not far ahead.

There's a lot to enjoy in this thriller (and little sexual perversion, something of a relief lately, I have to admit) -- plus Cross provides plot twists that raise the ante, as well as the suspense. Hard to believe this one's a debut; I'll be watching for more of his books. This one was brought across from the UK by Pegasus Crime, which is releasing a nice line of mystery and crime fiction in 2015. Another from Mason Cross, The Samaritan, is scheduled for UK release this May.